My annual Halloween playlists have featured a lot of Hip Hop, so this year I dug six feet deeper to find 13 new tracks. The Horrorcore genre is filled with amazing songs from artists like Insane Poetry and Immortal Technique, but those are too scary to dance to. This mix will set the Halloween mood and keep people moving.

Amityville (The House on the Hill) by Lovebug Starski

The Crypt Jam by John Kassir

I’m not sure it gets more Halloween, or 90’s, than this one

Movie credit raps are THE BEST

Take foolish pride, put it aside, and groove to MC Hammer

If you are going to rap about a murder spree, do it to John Carpenter’s ‘Halloween’

I’m going with a live version because it suits this wild, raucous song

This forgotten freshness takes you on a Trick or Treating journey

Time to get the party ramped back up with some Squatchin’

If you love bhangra, kung fu and vampires this is the track for you

Any Gravediggaz song would work, but this one ends with Vincent Price’s laughter

Sneak Preview – Put Up Your Spooks

Here is a sneak preview of our new spin-off podcast, Put Up Your Spooks! Ryan and Jeff rate and review horror tv anthologies from the 80’s and 90’s. 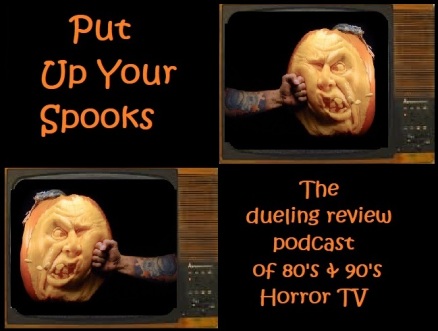 Our first contender, from the wintry north, is ‘The Phantom Cab’, the pilot episode of 90’s kid show ARE YOU AFRAID OF THE DARK?

Next comes ‘The Man Who Was Death’, the pilot episode of 80’s adult horror TALES FROM THE CRYPT.

Got a favorite episode? Throw your hat