Another year, another Comic Con.  This year, however, was different.  I was there as a PROFESSIONAL.

not a professional dentist

Per usual I skipped the panels and screenings and focused on the booth displays, cosplayers and creators in attendance. 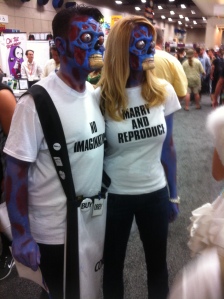 Fortunately I had plenty of bubble gum

This car would also be very useful during the zompocalypse

A giant display with almost every Marvel action figure in an epic brawl – a direct look into the brain  of my 13 year old self.

I had a clear agenda for this convention. 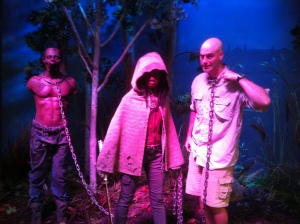 It was a terrific success on both counts.  My friends and I had a nice dinner with Alice Henderson and then we met up for drinks with Nathan Long, Mike Lee, Alix Carter, Chelsea Monroe-Cassel, Ed Erdelac and Sariann Lehrer.  This year was very different from the usual fan experience, but in a wonderful way.  It was exhausting and overwhelming as always but I returned home inspired and invigorated.   Looking forward to next year!