A Splotch, A blotch: 13 Songs about THE BLOB 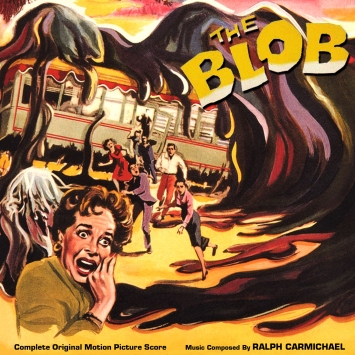 I heard the unmistakable refrains of The Blob theme song, by Burt Bacharach and the Five blobs, on a Spanish language radio station. You can hear more about my descent into madness here.

I could not find a comprehensive list of songs about the Blob, so I knew that I must build my own. Unfortunately it seemed that every electronica band, by law, must label one song on each album ‘the blob’. Many hundreds of songs later, here is my handpicked list of 13 tunes you can and should play at your Halloween party.

The Blob Theme Song by Burt Bacharach and the Five Blobs – We begin with the original and mutate wildly from here.

La Burbuja by Liberacion – Here is the Spanish version that will make you shake your ‘burbuja’.

La Burbuja by Manuel ‘Loco’ Valdes – A very strange version by a Mexican comedian that has a lot to say about love, heart ache and banishing people to Japan.

The Blob by Sleaford Mods – This is a relatively new song by a british punk duo and it is delightful.

The Blob That Ate Everyone by Smashy Claw – A very literal approach to the subject that mixes melancholy strains with indy rock.

Green Slime by Richard Delveccio – This 70’s acid rock song is about a slimy monster from outer space, so I’m including it on the blob list. This jam will scream across your mind!

Can’t Stop the Blob by Far Flowers/Jordan Dittus – No Halloween playlist would be complete without some surf rock!

The Blob by Love & Respect – this rap demo is simple, effective and goes to an unexpected place that cracks me up.

Here Comes the Blob by The Electric Company – This song and video really freak me out.

This list is now trapped in arctic ice, but teeming masses of sloppy music await you on this bonus alternative playlist.

One response to “A Splotch, A blotch: 13 Songs about THE BLOB”